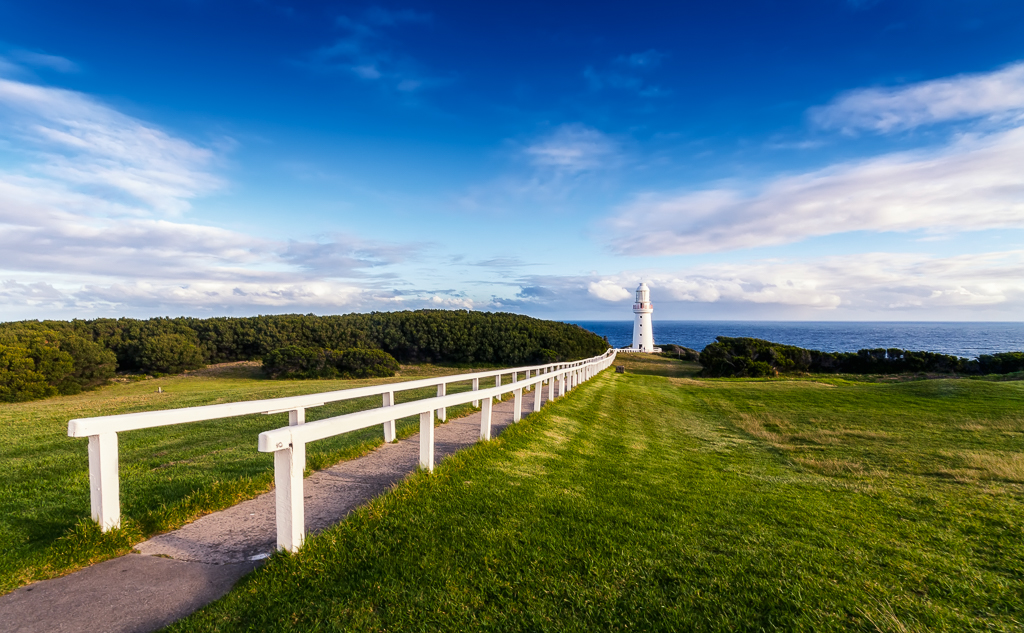 When you consider a lighthouse of significance in Australia, Cape Otway Lightstation is perhaps among the most important. It occupies a place in history in Australian maritime history as the oldest surviving lighthouse built on the mainland, on a site that was hard to access. Access to it is much easier now, but involves a 12km detour off the main highway. The lighthouse was decommissioned in 1994, replaced by a low powered solar light in front of the original tower. It is now more of a tourist attraction, where one can book accommodation to spend the night on the lighthouse grounds.

The lighthouse was set up to mitigate the occurrence of shipwrecks which claimed hundreds of lives in this section of the Australian coastline. Australia’s first submarine cable was laid between here and Launceston, Tasmania in 1859.

The lighthouse itself offers quite the photographic subject, but do not limit yourself to the outside of the lighthouse alone. Consider taking a tour to the top of the lighthouse to get a close up view of the lighting system (which has now been decomissioned and has been left in place purely for historical purposes). The traditional light in the lighthouse has since been replaced with a solar powered beacon in front of it, towards the cliff face.

If you are here around 3p.m., make sure that you partake of freshly baked scones at the tea shop at the top of the hill which looks down upon the lighthouse.

The time of the year has a lot to do with what you can expect to capture while visiting here. In the summers, unless you were staying at the lighthouse, you would be hard pressed to capture anything but a daytime shot of the lighthouse and its grounds. In the winters, if you come here around 4:30p.m., you should have just enough time to capture the lighthouse in the dying rays of the sun (sunsets are as early at 5:00p.m. around the winter solstice). This is an area with very little light pollution, and hence, provides a perfect location for long exposure astro-photography if you’re staying here overnight.

Plan your arrival. The lighthouse is a 12km drive from the highway on a road that winds through the forest and climbs. Entry to the grounds closes at 5:00p.m. sharp, though you can exit after that without any issues. Make sure that you have enough petrol to get back either to Apollo Bay, or up to Lavers Hill. These are the closest places where you will be able refuel.

Your choice of lens would be wide angle or fish-eye. There isn’t much impact of sea spray here, but passing showers might give you a bit of grief. Carry a small towel and some microfiber cloth to keep your lenses clean. Tripods are not, and you would comfortably be able to shoot hand held, unless you are shooting with long exposures.

The site has well marked out paths. A comfortable pair of walking shoes is recommended. Runners are also suitable. Sandals and open-toed shoes will also suffice, though I wouldn’t recommend wearing them in this region if you have visits to other places in the area.

Official web site: http://www.lightstation.com
Vehicular Access: Sealed road to the parking lot.
Pedestrian Access: Well maintained gravel and paved paths to the lighthouse.
Fitness levels required: Suitable for any reasonably fit individual. May not be suitable for individuals with mobility restrictions.
Walk Difficulty: Easy.
Amount of time required at the site: About two hours.
Price of Admission: Adults – $18.50; Concession – $16.50; Children (school students) – $7.50; Family (2 adults 4 children) – $46.50; Pre-school children – free. Discounted tickets can be pre-purchased from the Visitor Information Centres at Apollo Bay and Lorne, and from Otway Fly.
Access hours: Every day except Christmas Day from 9a.m. to 5p.m.
Notes of caution: There are strong winds in the area. When near the edge of the cliff by the lighthouse, stay within the safety barriers.
Recommendations: Access to the lighthouse requires a 12km (one way) detour off the highway which is via a sealed but very circuitous route which will take you through areas of forests that are home to koalas. Allow yourself at least half an hour in each direction to get to the lighthouse, and keep an eye out for koalas in the trees, and occasionally, on the road. Also, consider staying overnight at the lighthouse grounds (very limited accommodation, and bookings are essential) in the Head Lightkeeper’s House or the Manager’s House for a truly unique experience.