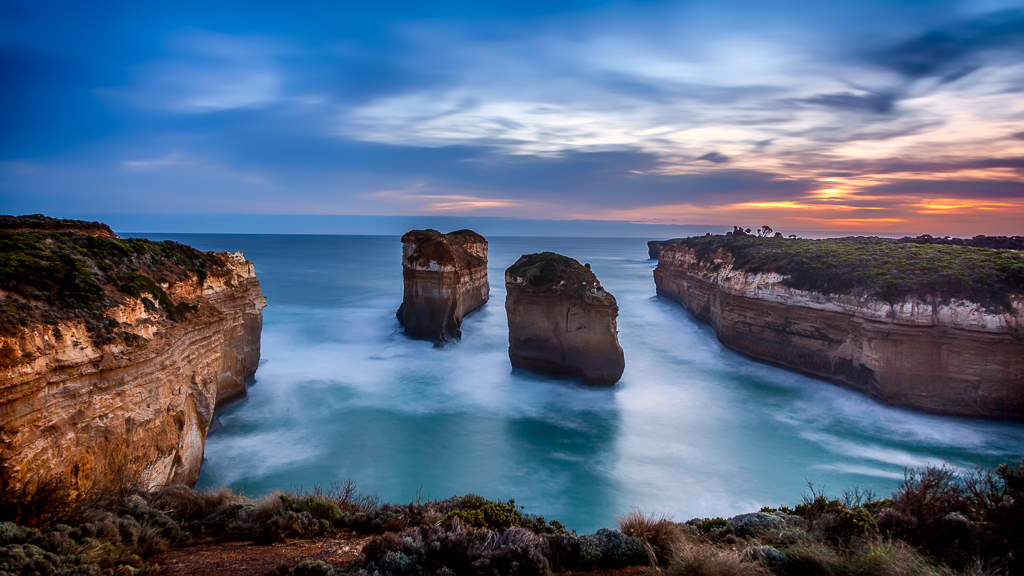 If you ever needed evidence of erosion on the surf coast, the two limestone stacks known as Tom and Eva, which are the remnants of the Island Arch, would rank at the top. They are named after the two teenage survivors of the wreck of the Loch Ard from 1878. This shot was taken in April 2010. When I first visited Great Ocean Road in the southern summer of 2007, the Island Arch was still whole.

The central section that is now void between the two limestone stacks still stood, and remained standing till June 2009 when I’d paid a visit. A few weeks later, I’d read the news reports… the arch had finally collapsed. It happened at dawn with just a couple of tourists nearby who heard the rumbling and the crash, only to turn around and see that the scene that they had observed just moments earlier had completely changed. For now, this is how it lies, before mother nature carves another piece off the rocks into the waters of the ocean beneath.

Access to the viewing deck of  Tom and Eva is via an even gravel path that is partially paved. It is an easy walk taking no more than a few minutes.

The location is open all year round. The weather in the area constantly changes. The best times to shoot here are from sunrise to the middle of the morning. While there are a few alternative vantage points to shoot this feature from, this one seems to be the most popular.

With the weather in this area being as changeable as it is, check the forecast, and allow yourself some extra time in case you get caught in a passing shower (most of which last about 15 to 30 minutes).

The effect of sea spray in this location is very pronounced, and further excacerbated by strong winds that are prevalent in the area. It is recommend that one carry a towel and some microfiber cloth to keep one’s lenses clean. Tripods are recommended, especially if you are planning to do a long exposure shot. The winds in the area get very rough. If you do use a tripod, carry a sturdy one with a hook to which you can weigh down with your bag. Your choice of lens would typically be of focal lengths of under 40mm.

If you’re planning an early morning or late evening shoot, be sure to carry a flashlight with you.

Always dress in layers. The weather and temperature here constantly changes, and its very easy to suffer from exposure to the elements. In the summer, it is imperative that you have sunscreen on you. If there are showers in the area, consider wearing a weatherproof jacket, and have a rain-shield or plastic cover handy for to protect your camera.

Your choice of footwear is important. Comfortable walking shoes (not runners) are recommended.

While in the area, be sure to check out the Blowhole, the Razorback, and Loch Ard Gorge.

Vehicular Access: Sealed highway access to the parking lot.
Pedestrian Access: Firm partially paved pathway.
Fitness levels required: Suitable for any reasonably fit individual. Suitable for most individuals with mobility restrictions.
Walk Difficulty: Easy
Amount of time required at the site: About 20 minutes.
Price of Admission: Free
Access hours: 24 hours a day
Notes of caution: The area is subject to strong winds and constantly changing weather. The cliffs in the area are unstable. It is highly recommended that one stays on the marked paths only.
Recommendations: The volume of tourists in this area peaks around 3p.m. when the tour buses from Melbourne arrive.